What I Read in July 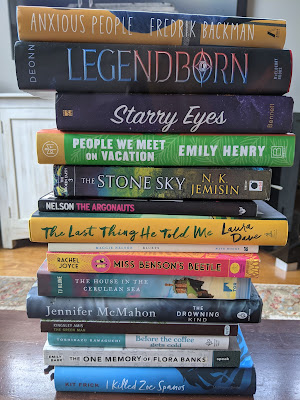 This is the stack of books I read in July (Actually, summer in June/July, so July starts 4 books up the stack). Caveat, I am a teacher and I try to dedicate most of July to just REST, RELAX, RECOUP. I was pretty successful with that this year! In the spirit of Mel's post that is in the spirit of Jess Lahey's post, here are my thoughts on the books:

The Green Man by Kingsley Amis
This was a Bryce Pick, from my birthday when he realized he didn't get me any books and it really upset me that that tradition of ours was disrupted. It is totally weird, and from the 1970s, around the same time as The Exorcist and Rosemary's Baby, and takes place at a sort of haunted inn called The Green Man (and also there's a mythical creature called The Green Man). The main character is pretty despicable, he drinks way too much and cheats on his wife and his great goal in life is to finagle a threesome with his lover and his wife, but there's some good atmospheric stuff and it got real creepy in the second half. Not necessarily a page-turner, but an interesting look at 1970s horror fiction.

The Drowning Kind by Jennifer McMahon
This was such a great gothic-style thriller-slash-ghost story, which is where Jennifer McMahon shines. There's sisters who are estranged due to difficult dynamics, and a house with a natural springs pool that one sister inherits over the other, but disastrously. The pool is kind of evil. The wronged sister is called back when the mess-up sister who inherited the house turns up dead in the pool, and it turns out she was researching the history of the property and the pool and this is not an isolated incident. SUPER creepy, great flawed people, and really reminded me of a inn that we stayed at in Damariscotta, ME, that had a pool and was equally creepy. Love Jennifer McMahon, put this one right up with The Winter People and The Invited for delicious, well-plotted creepiness. (NOTE: infertility subplot)

The House in the Cerulean Sea by TJ Klune
This book is getting its own post. This book is probably my FAVORITE book that I've read all summer (and maybe in a very, very long time). It is just so lovely. It involves magical children, a caseworker who doesn't wish to get too involved, and a situation with a particular "difficult" group home of sorts that changes his mind about how he approaches his job and his life. IT WAS SO GOOD. I have recommended it to a million people, and everyone, EVERYONE has loved it. I think anyone who works with children should read this book. Post forthcoming!

Bluets by Maggie Nelson
This was recommended in a writing class I took, and it was such a quirky little book but enjoyable. It's basically a love letter to the color blue, written in 240 tiny numbered snippets, that then give you a look into Maggie's life. I learned that there's a tool for measuring the color blue of the sky, a cyanometer. I learned that food photographers typically didn't use blue dishware because blue inhibits appetite (somehow). There's a lot of art and film discussed, and a lot of sex. I've never read anything quite like it.

Miss Benson's Beetle by Rachel Joyce
I thoroughly enjoyed this book. It's heartwarming, funny, adventurous -- just wonderful. Miss Benson is a woman of a certain age who has found herself in a life she is disappointed in and decides to make a change and follow her dream of finding the golden beetle of New Caledonia, but she needs an assistant. The assistant she gets is not at all the practical person she'd hoped for, but a sexy woman with terrible spelling named Enid Pretty. Enid turns out to have her talents though, and they go off on a wild adventure. It was great fun, lovely strong women, and I learned a bit about beetles and New Caledonia. It was sort of in the vein of Where'd You Go, Bernadette and Eleanor Oliphant is Completely Fine. (NOTE: miscarriage/baby loss subplot)

The Last Thing He Told Me by Laura Dave
Did not love this book. I see it everywhere, I got it through Book of the Month Club thinking it was sort of a thriller...it wasn't. It didn't hold my attention.

The Argonauts by Maggie Nelson
This book did get its own post, which it thoroughly deserves. It's a slim memoir written in lyric essay about the simultaneous transitions both Maggie and her spouse made -- her pregnancy, and her spouse's transition. Maggie writes about their love, their marriage, their baby, but it's just so poetic and gives a window into a different experience than I am familiar with.

The Stone Sky by N.K. Jemison
This is the third book in the Broken Earth Trilogy, which starts with The Fifth Season and continues to The Obelisk Gate before concluding here. It is a very, very dense read but worth it -- the world that N.K. Jemison creates is just incredible, and there is so much about grief, and identity, and fear, and racism, and love. Excellent world-building.

The People We Meet on Vacation by Emily Henry
This was another Mel recommendation, and it was glorious summer fun! It felt very When Harry Met Sally, and I just adored the friendship and dynamics between Poppy and Alex. I loved how goofy Poppy was. It was like a perfect beach read!

Starry Eyes by Jenn Bennett
This was a YA recommendation from my school library, who said, "I feel like YOU are the main character!" So, the main character is a girl with anxiety who gets hives when super anxious and needs to have a plan for everything, and she has curly hair and is very clumsy. And sarcastic. It was so weird to read this one after The People We Meet on Vacation because it was very, very similar in many ways (friends! A rift! Will they-won't they?). But, this one involves a hiking trip in the Sierra Nevadas and the main character is obsessed with art stronomy, which was super cool. And there were bears, which was funny because it was right before we went to the camp in Maine. It was an adorable read.

Legendborn by Tracy Deonn
This is the first of an upcoming trilogy, and I've had it for months and months but hadn't started it, and then it was EVERYWHERE on NPR and in my google feed. It is a fantastic YA fantasy that takes you to the Early College program at UNC, where the main character, Bree, has gone as a high school student with her best friend from home. Bree is grieving her mom, who died in a car accident, and has a weird feeling that there's more to that story. She gets involved in secret society stuff when she stumbles into a fight with magical creatures by a secret society that is TRULY secret and connected to Arthurian legends. That and institutional racism that's always been a part of UNC and Bree's existence as a young Black woman swirl together in a delightful adventure with magic and love triangles and Chosen One tropes galore. I can't wait for the second book to come out!

Anxious People by Fredrik Backman
I love SOME Fredrik Backman books -- My Grandmother Asked Me to Tell You She's Sorry and Britt-Marie Was Here were wonderful, but I absolutely hated A Man Called Ove. Which I know is an unpopular opinion, ha. But Anxious People? Went on my special shelf (along with The House in the Cerulean Sea). It was soooo good. I love when authors can interweave things masterfully and make connections that you don't see coming, and this had all of that. Also, gems of wisdom like, "Some people accept that they will never be free of their anxiety, they just learn to carry it," and, my personal favorite: "The truth of course is that if people really were as happy as they look on the Internet, they wouldn't spend so much damn time on the Internet, because no one who's having a really good day spends half of it taking pictures of themselves. Anyone can nurture a myth about their life if they have enough manure, so if the grass looks greener on the other side of the fence, it's probably because it's full of shit." HA!

So there it is, almost to September but those are my July books. Some really, really good ones! What books have you read recently that you've really enjoyed?

at August 27, 2021
Email ThisBlogThis!Share to TwitterShare to FacebookShare to Pinterest

Jess
Welcome! I'm a married woman in my mid-forties, a special education teacher, a gardener, a reader, a writer -- and living a beautiful life after loss. We spent seven and a half years trying to build our family through IVF, donor gametes, and domestic infant adoption before making the insanely difficult yet absolutely necessary decision to choose a different path than the one we'd envisioned and resolve our infertility journey without parenting. After over 10 years blogging under My Path to Mommyhood, it's time to continue my story under a title that is authentic to the path we actually travel. I look forward to sharing the process of rebuilding a life after things don't go to plan (understatement), of moving forward with purpose and beauty while acknowledging the grief of a dream not lived -- with honesty, empathy, and humor. Thank you for joining me!