I mean, I do still have self-care around the day. My guidelines are pretty similar as when I was in the raw times:

1) No social media. I mean it. NONE. You can think that you'll be okay but it is way too easy to go down a voyeuristic sad spiral and it is overwhelming. No thank you. I probably won't go back on until a few days pass because the spiral keeps on spinning for days.

2) Do something nice for yourself. We had our requisite Sunday blueberry pancakes and bacon, and then I finished an IEP that I've been behind on for my second to last meeting of the year, we had tuna melts for lunch, a zoom with Bryce's mom and stepfather, and then took a really long walk. I tried to plant things, but I'm not 100% in both arms (more on that later) and the blackflies were literally swarming my head and feasting on me, so nope. I felt like I had a good balance of getting stuff done and restorative things.

3) Go for a walk somewhere you won't be bombarded by families. Easy in my neighborhood, where a walk around the block looks like this: 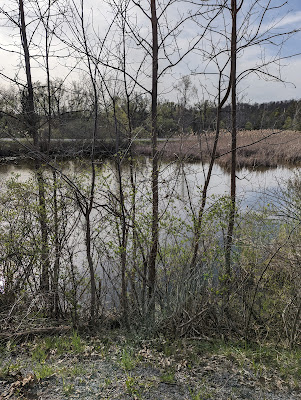 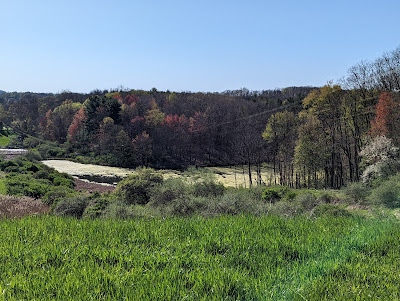 Even so, as we were heading home and had two choices, we looked down one way and saw a family with a dog and a small child on someone's shoulders, and chose to go the other way. Why face that if we don't have to?

And that is basically it! I celebrated with my mom yesterday in the driveway (with tons of uninvited blackflies), a combo my-birthday and her-Mother's Day. Oh yes, that was key in the before times -- celebrate with your family on a different day if you can. It makes a difference.

That's the other thing -- some years my birthday is immediately followed by Mother's Day. It felt like a one-two punch for so long. Reminders that I was getting older (either even less fertile or less appealing in the adoption process), paired with reminders that I wasn't a mom (and eventually would NEVER be a mom) seemed a cruel combination. But my birthday didn't bother me either this year -- other than that I can't say I'm half of 90 anymore. Half of 92 just doesn't have the same ring to it.

We actually went to a fancy restaurant, but on a Thursday (less busy) and in a little side room with no other people, and even when we went to the bathroom we went away from the bar and so NEVER PASSED A SINGLE OTHER PERSON. Which is good, because this is my 3rd Pandemic Birthday and my county in NY is a High Transmission area and the CDC is "urging" people to mask but do most people mask? NOPE. But we do, and hopefully I continue to avoid it. Ugh. Whoa. Major sidebar. Here is my birthday dinner pic:

I guess what I want you to know is that this day can be so, so awful when you don't know if you'll ever be a parent, and devastating in the early days of KNOWING you'll never be a parent. But it really does get better. Not in a "everything's awesome and it doesn't hurt at all" kind of way, but in a "this used to feel like a horrific injury and now it's just the little lingering ache of arthritis and only when the conditions are just right." Which is a great place to be, actually.

Here are my resolved without parenting Mother's Day posts, going back to the very first:

2020: Soothing the Mother's Day Ache (this and earlier are from My Path to Mommyhood)

2018: #Microblog Mondays: My Un-Mother's Day and Coming Up On Mother's Day

2017: Huh, actually I never wrote a dedicated Mother's Day post this year of crisis. Probably because a) May 8th Bryce called the adoption agency to say we were done and we officially ended our journey, and I spent Mother's Day frantically writing all my stuff for National Board Teacher Certification. Mother's Day was sandwiched between making the final call and packing up our nursery, so I guess I decided to write about other things.

The last thing I want to leave you with is that I've noticed a lot more sensitivity around the day, at least in the public radio classical stations we tend to listen to. We heard a lot of "honoring the mothers, physical and spiritual" and other caveats that acknowledge that not all women are physical mothers. The opt-outs for emails about Mother's Day seem to be decent, although they go to my "promotions" folder in my inbox to die most of the time so I didn't see them firsthand, only heard about them from others. And then, on Friday, the evening custodian came by to chat when I was still there at 5:45 (Friday evenings are actually a great time to get shit done, no one's there), and asked about weekend plans and then said, "Are you a mom?" and when I paused and said, "Well, no. No I'm not." HE then paused and said, "That's okay, I'm not a dad either." It was a lovely moment of connection and I appreciated that there was no assumption made.

So, Officially Childless Mother's Day #6 is almost over and I'm just so grateful to be in the place I am today. I hope that brings you hope if you're still deep in the swamp of sadness. And if it was a pretty good Mother's Day for you, too -- well cheers to us!

at May 08, 2022
Email ThisBlogThis!Share to TwitterShare to FacebookShare to Pinterest

Jess
Welcome! I'm a special education teacher, a gardener, a reader, a writer, a wife -- and living a beautiful life after loss. We resolved without parenting after nearly 8 years of trying to build our family through IVF, donor gametes, and domestic infant adoption. After 10+ years blogging as "My Path to Mommyhood," shifting to "Finding a Different Path" explores and celebrates our authentic reality -- rebuilding our life and living, happily, without the children we wanted. Thank you for joining me!