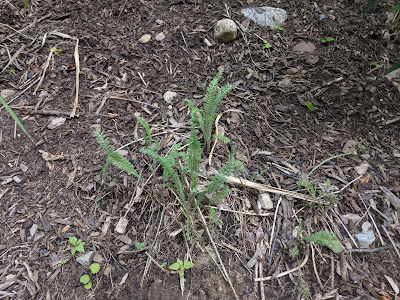 This sad clump of fernlike leaves is what's left of my yarrow (this is the last bed I have to mulch, and I haven't yet, so it looks even sadder). 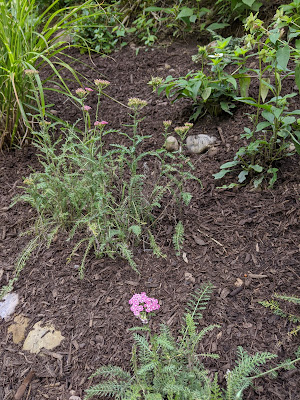 Well, the mulch is way better and there's actually flowers on it.

This year, I have an influx of adorable but insanely destructive baby critters that are decimating certain plants in my garden, yarrow among them. It's hard to be mad at these guys, but I am:

Grrrr. You can see that in the back, there is NO SHORTAGE OF GREEN THINGS TO EAT, but all these babies just love the gourmet stuff I've apparently put out just for them.

However, the other day, while bringing weed refuse down to a pile we have at the bottom of our hill, I found THIS: 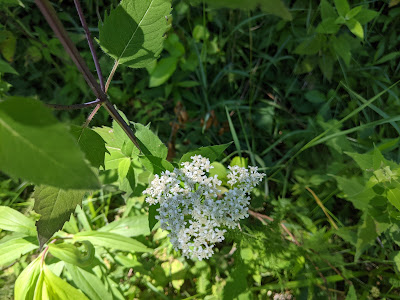 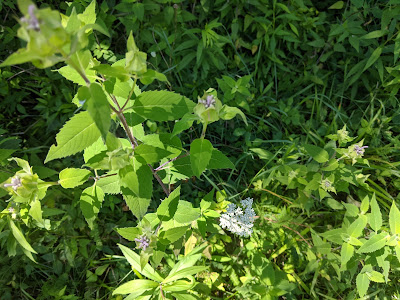 Snuggled in the weeds, and so much poison ivy, was YARROW! Tons of it! I have two theories:

1) When I deadheaded the old yarrow seed pods, I brought them down here with the refuse and they sprouted

It made my day. I was so upset about the loss of my carefully cultivated plants, chomped on by the abundant wildlife that, to be fair, was here first, that I totally missed this resurgence of pretty plants in a totally unexpected place.

I was stuck on what I wanted things to look like that I ignored what works in this wild place, but the beauty erupted elsewhere, where it was more suited to thrive. Maybe even growing out of a pile of shit.

DOES THIS SOUND METAPHORICAL?

There's that whole "bloom where you're planted" saying, but I also feel like you could upend it to "don't force things that don't work out, instead go with what blooms where it ends up."

What's frustrating is that a lot of plants that are being devastated this year were fine last year, but that works too -- sometimes there are unexpected setbacks. Learn from them and adjust.

I appreciate the wild flowers that crop up unexpectedly and don't get eaten:

I won't get more of what was clearly a very expensive salad bar, and instead will focus on the plants that clearly do well, which is a shrinking list due to deer, rabbits, groundhogs, crappy soil, and walnut trees (they make the soil poisonous, yay).

There is beauty though in all the things that thrive wildly here in this somewhat inhospitable plot of land. I will focus on that rather than mourning (too much) all my pretty plants lost.

at July 05, 2021
Email ThisBlogThis!Share to TwitterShare to FacebookShare to Pinterest

Jess
Welcome! I'm a married woman in my mid-forties, a special education teacher, a gardener, a reader, a writer -- and living a beautiful life after loss. We spent seven and a half years trying to build our family through IVF, donor gametes, and domestic infant adoption before making the insanely difficult yet absolutely necessary decision to choose a different path than the one we'd envisioned and resolve our infertility journey without parenting. After over 10 years blogging under My Path to Mommyhood, it's time to continue my story under a title that is authentic to the path we actually travel. I look forward to sharing the process of rebuilding a life after things don't go to plan (understatement), of moving forward with purpose and beauty while acknowledging the grief of a dream not lived -- with honesty, empathy, and humor. Thank you for joining me!